Classic beauty intertwined with incredible talent and a keen sense of style, Hayley Hasselhoff is one of Hollywood’s brightest rising stars. Starting at the young age of 14 Hayley began her modeling career, signing with Ford Modeling Agency as a plus size model. Her career immediately took off leading her to become the celebrity spokesmodel for popular U.S. retailer Torrid and British retailer Syle369. Aside from her modeling, Hayley decided to focus on her other true passion, acting. Having previously been featured on BAYWATCH alongside father David Hasselhoff, Hayley was destined to make her mark in the acting world. While juggling her modeling career, she managed to star in ABC Family’s Huge created by Winnie Holzman, as the lead role “Amber.” From there she was featured on Disney XD’sPair of Kings as “Sasha” and the upcoming musical comedy FEATURE Fearless as “Rebecca.” In July this year, she appeared in Syfy’s Sharknado 4 as “Supervisor Mary Jane”.

After re-discovering her modeling career, Hayley went on to sign with Wilhelmina Models. She headlined a number of runway shows in 2014 UK Plus Size Fashion Week, Paris Pulp Fashion Week, and Sheego during Berlin Fashion Week (as part of its trade show Curvy is Sexy.) On top of headlining for some of the largest plus size fashion events, Hayley capped off the summer as the face of Yours Clothing’s summer range across the UK and took home the Best Plus Size Model Award at the 2014 British Plus Size Awards.

Hayley then went on to headline New York Fashion Week in 2015 for EDER + BERK and closed UK Plus Size Fashion Week, walking exclusively for mega e-retailer, Boohoo. In addition to being an ambassador for UK based event The Curve Fashion Festival (TCFF) and for the Plus Size Fashion Days in Hamburg, Hayley was also nominated for Best Model and Best Celebrity Female at the British Plus Size Awards in 2015.

Going on to be the cover star for 2015 Fall Fashion issue of SLiNK Magazine (UK) and Bello Magazine (US), Hayley earned a coveted opportunity to shoot the Persona Collection by Marina Rinaldi (exclusively for the “Hey Gorgeous” Fall 2015 look book) which was profiled on Entertainment Tonight. She topped off the year with a special project with Luisa Via Roma that was widely received by both the European and American markets.

With body image and health being of the utmost importance to Hayley, she was asked to speak at parliament in December 2015 on behalf of MP Carline Nokes to help pass the Model Law protecting models in the UK from going to unhealthy lengths to further their careers. She spoke alongside co-model Rosie Nelson, delivering the petition signed by more than 113,000 people to the All-Party Parliamentary Group (APPG).

Earlier this year, Hayley shot her SS16 edits for Elvi’s collection. Her collaboration of her edits were released in March of this year. Hayley’s latest campaign was with mega-high street retailer Evans for the #Iamme campaign that featured the most influential plus size woman in the industry today.

Hayley has now taken on the role as mentor and judge on Next Top Models first all curve model competition for Top Model Scandinavia 2016. She finished filming a couple episodes in Lisbon, Portugal where you will get to see her hands on with the girls to help them succeed in the modeling industry and competition. The season began airing end of August 2016.

Hayley always makes time in her busy schedule for charities world wide. She was just named the 2016 international ambassador for charity Dancers Against Cancer in association with the Austrian Cancer Aid.

Hayley frequently tours modeling hot spots including Australia, Germany, Italy, Paris, and London promoting positive body image and confidence to young women and girls of all ages, races, and sizes. She also feels passionately about being able to share her experience in both street and high-end plus size fashion and hopes that these types of lines will soon be accessible to all plus size women.

Her message has been portrayed in recent features which have appeared in Cosmopolitan, Glamour, Sunday Life, Seventeen, and Teen Vogue. She has garnered profiles on TODAY, Good Morning America, Entertainment Tonight, Lorraine Show and Access Hollywood Live (just to name a few.) Hayley also recently was noted as a guest Los Angeles contributor role for Australia’s TV show, Channel 7’s “The Daily Edition.”

For Hayley, modeling has given her the power to have a voice and be an inspiration to other girls facing the difficulties of being plus-size. Giving back to her community is of great importance, leading to her involvement in multiple charities including Dancers Against Cancer, Friends of El Faro, The Make a Wish Foundation, and her foundation Teens Helping Teens which raised $167,000 for the Children’s Hospital Los Angeles. 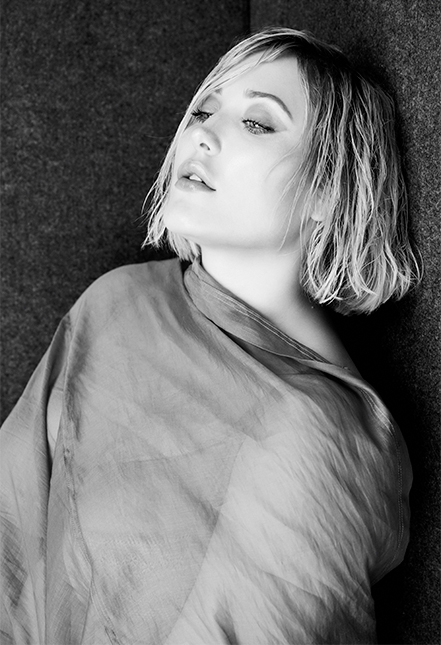